I posted last year about making pesto in the food processor. I’m writing now to say that I’ve changed my ways.

I use a large mortar and pestle instead and make it by hand. I really enjoy slowing down for a few minutes and methodically grinding the ingredients together while I take in their fragrance. I feel like I appreciate the final product more.

My preference for ritual aside, pesto made by hand covers pasta much better and has a better blending of flavors. See Dan Gritzer’s post on Serious Eats for a side-by-side comparison. His was the first article I found when looking for a mortar and pestle pesto recipe after I bought a huge granite one to make guacamole in. Dan’s recipe is a great place to start experimenting from.

The exact recipe changes every time, but the method stays the same:

Here are some ideas for experimentation:

If you are in the market for a usable mortar and pestle (not one of those tchotchkes you see at Target), this is the 12lb behemoth I use.

Cheese on tacos is usually boring and bland, but it doesn’t have to be that way. Cheese has some pretty cool properties: It can be melted and crisped.

I regularly tweak my taco meat recipe, so last week I was searching for inspiration while I probably should have been working. I stumbled across an article from Serious Eats where Josh Bousel argues that we are going about cheese on our tacos all wrong. Instead of  just sprinkling cheese on our tacos like n00bs, we ought to melt our cheese directly to the tortilla. You should read his article.

Breifly, you melt the cheese in a non-stick pan and then throw down a tortilla (corn works best) over half of it. Once the cheese starts to crisp and the tortilla is warm, remove the pan from heat and carefully slide a spatula under the tortilla and cheese to remove your new creation.

It works on breakfast tacos and regular tacos alike, as well as with a variety of cheeses. The cheese is crispy and crunchy around the edges, still a little gooey on the tortilla, and has a deep, rich flavor.

Read Josh’s recipe on Serious Eats, then run to the nearest kitchen and give it a try!

I don’t remember the first time I tried pimento cheese, but I do remember when I realized how delicious it is. The two summers I lived in Atlanta could be summed up as an extended tour of the city’s pimento cheese offerings.

Drain and dice the pimentos, then mix everything together in a non-reactive bowl and let the flavors mix for a little while before serving. 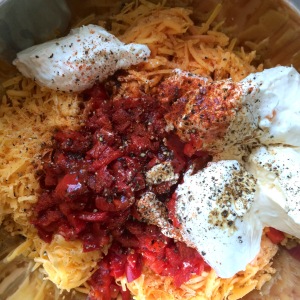 I tried putting grated yellow onion in half of the batch. I liked the flavor it added, but I don’t think everyone would like it. If you like onion, give it a try!