Amanda and I started a tradition the first Autumn after we got married: Go apple picking, make apple pies, and make apple butter. We look forward to it every year.

We started out making apple butter in a crock pot, but last year I switched to making it in an Instant Pot.

My recipe is still pretty close to the original crock pot recipe. Last year I used half brown sugar and half molasses. This year I used honey and molasses, which I’ll probably stick with.

If you are going to give it out to family and friends, I highly recommend you can and process it.

This is a guest post from KatieRose McEneely, a fellow culinary experimenting friend from college. She is a fantastic artist who created the paper cuts of a cow, sheep, and pig that currently hang above our couch. Thanks for joining in the challenge, KatieRose!

If you want to join the Cooking the Books challenge, see the details at the bottom of this post.

1. How to Cook Everything Vegetarian, Mark Bittman

I made the balsamic and rosemary variation–the original recipe uses sherry vinegar and chili powder. I didn’t take a photo, but it looks like cubed squash in a dark sauce, so.

Why I tried it: I had all of the ingredients and the cooking method was unfamiliar to me (it’s Vietnamese in origin). Plus, I thought I’d have a fighting chance of more than one member of the household giving it a taste.

It is technically not a one-pot meal, so I served it with a green salad and risotto, per Bittman’s recommendation.

Result: Real talk: would never make this again. The first step consists of making caramel, then adding vinegar and water to dissolve the caramel (and perfume your kitchen with the scent of hot vinegar, which was met with protests from other members of the household). Then, add the onion and cook until softened; add cubed squash, cover and steam for three minutes, then cook uncovered until squash is tender. Finish with the spices and cook a bit longer, until the sauce thickens.

I really liked the texture of the squash–I usually default to roasting it–but the flavor was much too sweet, and the rosemary was not discernable, despite adding a full tablespoon. Also, I question the nutritional value of a vegetable dish that contains more sugar than the following recipe, which is a dessert.

2.  Sister Pie: The Recipes & Stories of a Big-hearted Bakery in Detroit, Lisa Ludwinski 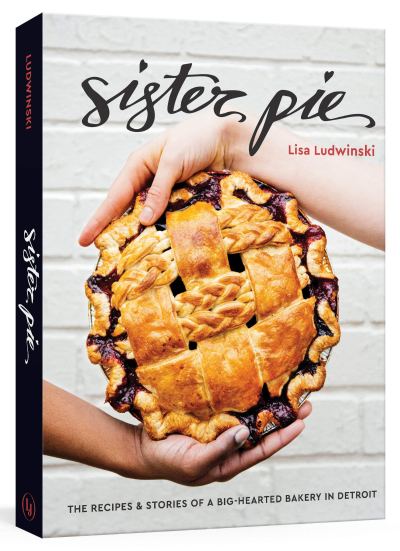 Why I tried it: I love pie (and I’m a huge fan of the Sister Pie cookbook), but I generally don’t enjoy custard or squash pies, possibly because I am lactose intolerant. This recipe has a very small amount of dairy, and uses full-fat coconut milk for the bulk of the liquid.

The recipe is available in full in many places, but here’s a link to it on Wisconsin Public Radio.

Result: Well, I’m converted. The pie is delicious; a faint coconut flavor, a smooth texture accented by the toasted unsweetened coconut garnish, and it’s not milky at all. It also baked in the time given in the recipe, but I attribute that less to the recipe and more to the fact that I finally bought an oven thermometer. 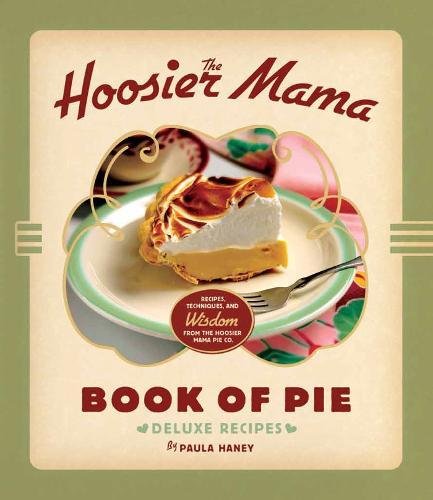 I’ll note that I did make an additional new-to-me recipe on Jan. 30; it was Hoosier Mama’s apple pie, from the eponymous cookbook, which I also own. (If you like pecan pie, her recipe is superlative.)

Look, I’ve made a lot of apple pies in my time, and this was the taskiest of them all (and the first to omit cinnamon!). Never have I pre-cooked the drained liquid from the apples, let it cool, chilled it further, and then incorporated it to the rest of the pie filling. I’ve eaten this recipe before, because it’s delicious, and the result was great.

I’m of two minds: I make pie because I have things lying around that can go into a crust, and most of the time I’m winging it. But the final product here is very consistent, and my dad really likes it. It might be a game-time decision (and on the plus side, it baked more quickly than my usual method, which involves piling apples into a shell and baking until the filling reaches the set temperature for jam).

All told: this was fun! My sister and I have an agreement to try at least two new recipes per month, so it was a good jump-start. I’m fortunate in that my cookbook selection is small and I’m pretty good about using them, but I’m a librarian, so I have a lot of access to new titles without committing to a purchase.

Thanks for the invite!

If you want to join us in the Cooking the Books challenge, send your posts to cagrimmett@gmail.com! I’ll guest post them here on Cook Like Chuck. Here are some guidelines:

Let’s dust off those cookbooks and put them to use this year.

Amanda and I drove up to Wilkins Fruit & Fir Farm over Labor Day Weekend to go apple picking. It is a tradition we started the year we got married. Sometimes the weather is beautiful and warm, sometimes it is rainy and cold, sometimes we have friends with us, and other times it is just us. But we always go. It is a cute little farm and they always have fresh apple cider doughnuts to buy in their bakery. 🍩

This year it was just us and the weather was gorgeous. It was one of the first cool days of the season and the sun was shining. We ended up picking two pecks of apples, a mix of Gala and McIntosh.

Also, since we went earlier than normal this year, peaches were still in season! We picked a few pounds of those, too.

How we used our Harvest

Amanda made a peach galette and peach hand pies, then we canned the rest so that we can make another galette later this year. In the spirit of using as much as possible, I took the water we boiled the peaches in to remove the skin and used it to make a peach and raspberry tea. And, of course, we ate at least half a dozen peaches while prepping them.

First and foremost, we made and canned two batches of apple butter. We ate about a dozen apples between the two of us over the next week, then we took what was left and made canned apple pie filling. Amanda took one peck to work to sell at the coworking/meeting space she manages.

We might cruise up there again later this fall to buy some cider to ferment here at home with champagne yeast.

We can’t wait to go again next year!

Amanda and I love apple picking. We go out in our flannel shirts, pick apples, eat cider donuts, sip hot apple cider, then come home and make apple butter and bake apple pies. It makes for a wonderful weekend. 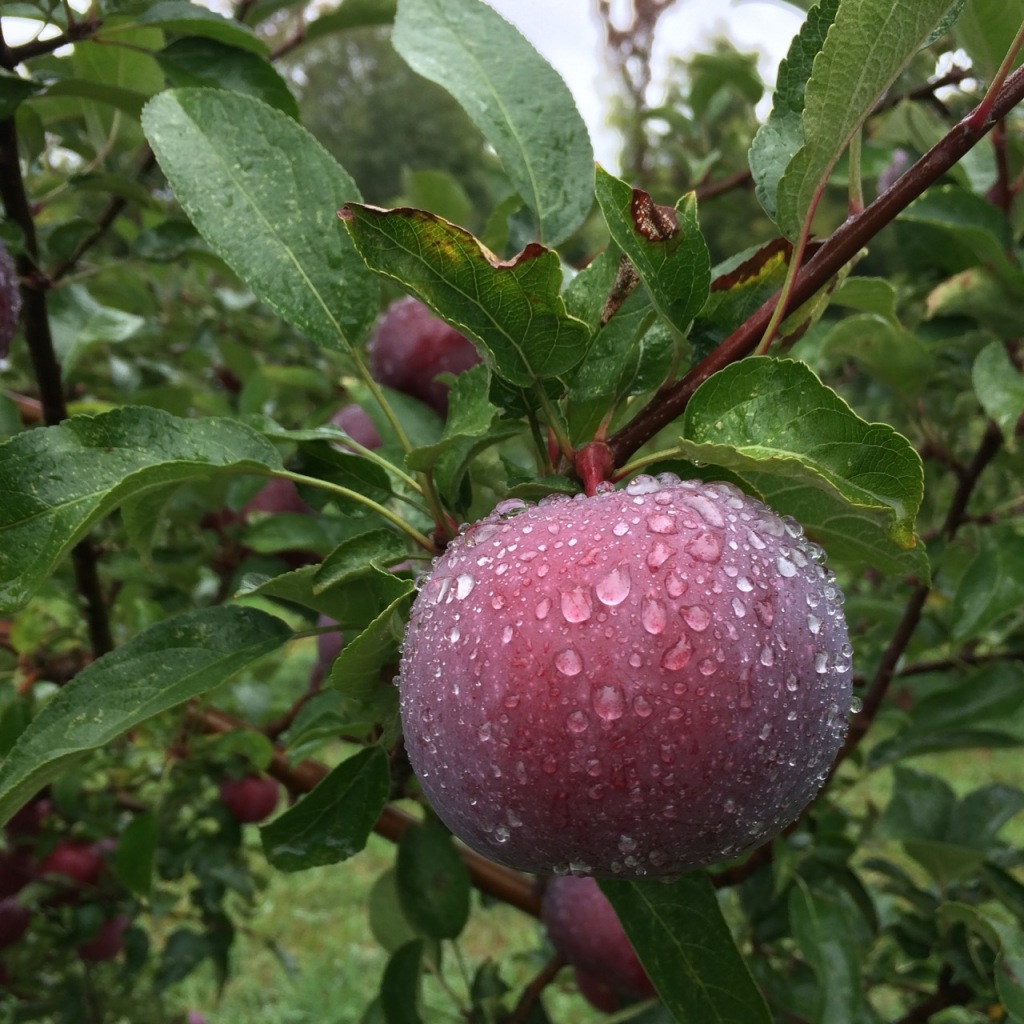 A half-bushel of apples (pictured above) is enough for two pies, two batches of apple butter, and a few apples left over to eat.

We start making the apple butter around 7pm and let it cook in a crock pot overnight. The house smells amazing when you wake up in the morning. After just a few more minutes of work, you are ready to slather it on toast.

Here is our recipe: