We are now three weeks in to our 2019 Whole30. Amanda and I have been traveling a lot for work this month. It is definitely tough, so for our weeks 2 and 3 update we wanted to share some of our tips for staying Whole30 compliant while traveling.

What are some of your favorite Whole30 travel tips? Throw them in the comments!

Yala’s Pizza, my favorite pizza joint where I grew up, sells half-baked frozen pizzas for you to take home and bake yourself. Whenever I go back home, my parents pick me up one (a double pepperoni), vacuum seal it, and stick it in my cooler right before I leave. They are the best.

I couldn’t find the recommended baking time and temperature online, so I had to call them. I figured I’d post the instructions here so that other Lorain County natives can search for it online instead of calling the grumpy guy at Yala’s. (And so that I’ll be able to find it next time…) Here it is:

I used my pre-heated pizza steel and baked my pizza for 15 minutes on the middle rack and turned on the broiler for the last two minutes to brown the cheese. Steel conducts much better than a stone or pan, so aim for closer to 20 minutes if you use a regular pan or stone.

It came out great:

Amanda and I drove up to Wilkins Fruit & Fir Farm over Labor Day Weekend to go apple picking. It is a tradition we started the year we got married. Sometimes the weather is beautiful and warm, sometimes it is rainy and cold, sometimes we have friends with us, and other times it is just us. But we always go. It is a cute little farm and they always have fresh apple cider doughnuts to buy in their bakery. 🍩

This year it was just us and the weather was gorgeous. It was one of the first cool days of the season and the sun was shining. We ended up picking two pecks of apples, a mix of Gala and McIntosh.

Also, since we went earlier than normal this year, peaches were still in season! We picked a few pounds of those, too.

How we used our Harvest

Amanda made a peach galette and peach hand pies, then we canned the rest so that we can make another galette later this year. In the spirit of using as much as possible, I took the water we boiled the peaches in to remove the skin and used it to make a peach and raspberry tea. And, of course, we ate at least half a dozen peaches while prepping them.

First and foremost, we made and canned two batches of apple butter. We ate about a dozen apples between the two of us over the next week, then we took what was left and made canned apple pie filling. Amanda took one peck to work to sell at the coworking/meeting space she manages.

We might cruise up there again later this fall to buy some cider to ferment here at home with champagne yeast.

We can’t wait to go again next year!

If you planted your garlic late last fall before the first frost, you are probably ready to harvest the scapes–the twisty little pointy part growing on the stalk from the middle of the leaves. Scapes are the flower stalks of the garlic plant, though garlic doesn’t produce actual flowers. 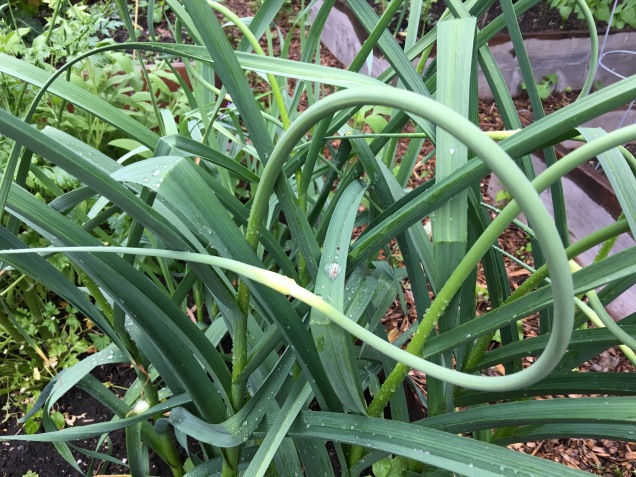 We cut them off early in the season so that the plan uses its energy in growing large bulbs instead. Also, earlier cuts have milder flavors. The flavor of the scapes get stronger and more harsh the longer they grow.

Instead of throwing them out, here are five ways you can use them:

I used one in scrambled eggs right after I picked ours: 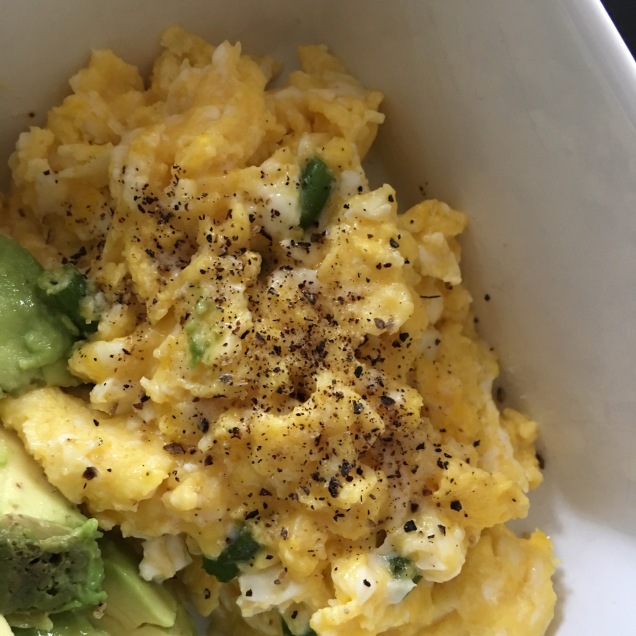 We’re probably going to use the rest of ours in omelettes. How do you like using garlic scapes? Let me know in the comments!

Amanda and I love having friends come stay with us. In fact, we have some friends coming to stay with us this weekend. This got me thinking about how I usually prepare for guests on the food & beverage side of things. My Grandma taught me that there is no faux pas worse than not having enough food or drinks for guests.

I thought it would be a good idea to get my checklist down on paper.

Back in January, Amanda and I met our friend Dani in Flushing, Queens, for a day of stuffing ourselves with Chinese food. We roughly followed the Serious Eats guide: How to Eat Flushing: A One-Day Food Tour of NYC’s Greatest Chinatown. Here is how it went.

We decided to meet at noon. Unfortunately, due to NYC’s ubiquitious weekend subway maintenance, Dani was running late. We all agreed to skip breakfast to make room for the mass quantity of dumplings we were about to consume, so we were pretty hungry. Amanda and I decided to get a quick snack from a street stall while we were waiting. We couldn’t really tell what anything was and we don’t speak or read Chinese (nothing at this stall was in English), so we just pointed at something and handed over some money. It ended up being fried tofu balls of some sort. Good little snack.


Dani made it about 30 minutes later and we made our way to the first destination: The Tian Jin Dumpling House. It took us a few minutes to find because it is in the basement food hall of The Golden Shopping Mall on Main St.

We got two plates of dumplings to share:  Pumpkin TangYuan w/ Sesame (the daily special) and Beef dumplings with turnip. I loved the ground black sesame seeds in the pumpkin TangYuan. They were slightly gritty with a sweet but savory flavor that worked well with the pumpkin wrapper.

After eating a few plates at Tian Jin, we decided to walk around the block to White Bear and order their well-known specialty: #6, wontons with hot sauce. People must order this all the time because the old lady behind the counter rolled her eyes when we ordered it.

These were probably the best dumplings we had all day. As Serious Eats reports, they are “dressed in not-actually-spicy chili oil, ground up roasted chili, and nubs of funky, salty preserved mustard root.” We would have ordered at least two more plates of these, but we wanted to same room for later.

With a belly full of dumplings and in desperate need of caffeine, we jumped ahead on the itinerary and went to Fang Gourmet Tea to have a world-class tea tasting.

The tea seller who led our tasting was a complete expert and taught us a ton throughout the process. She incredibly kind and patiently answered our newbie questions. We were invited to taste and smell the tea at every part of the 5-stage brewing process. She pointed out aromas and tastes that we would have missed on our own and pointed out what sets this tea apart from the others on the list.

We tasted the Premium Roasted Oolong and the Original Ti Kuan Yin Honey Aroma 50% Roasted. Both were incredible. We left with a new appreciation for the world of tea and had a newfound desire to buy a porcelain gaiwan and learn how to brew tea at home.

Right before we left, another party came into the small shop. I thought I recognized one of the guys, and it turns out I was right. It was Max Falkowitz, the Serious Eats contributor and author of the very guide we were following that day! I introduced myself and told him what we were up to. He gave us even more great tips on where to go. Super nice guy!

We walked around for a bit to stretch our legs and get some sun, then we headed over to Fu Run to get the Muslim Lamb Chop: A rack of lamb ribs covered in cumin and ground chiles. They were fiery and delicious. We got a plate of pork fried rice as a side.

Dani had plans back in Manhattan late in the afternoon, and Amanda and I did, too. So instead of getting BBQ or Dosas for dinner, we decided to get an early dessert before heading back across the river. We scoped out a few places, but ultimately landed at Iris Tea & Bakery. We picked four desserts to share:

After enjoying these, we made a bee-line for the subway and went back into Manhattan.

We’ll be back for more, Flushing. We need to have more #6 at White Bear, drink some more tea, and make our way to Mapo for BBQ and Ganesh Temple Canteen for dosas.

Next time you are in NYC, set some time aside to hit Flushing. It is very close to LaGuardia Airport, so leave two hours early for your flight and stop in Flushing for a meal. Then get a cab to LGA from Flushing, which shouldn’t take more than 15 minutes.

If you are visiting NYC and want to maximize your chances of getting into a hot restaurant without reservations, what should you do?

Go there for lunch during the week.

The place probably won’t be crowded.
Places I’ve had to wait over an hour to get into for dinner during the week have been completely dead at Friday during lunch. I was one of 10 people at one of my favorites places at 12:30, the middle of the lunch rush.

The prices are lower.
With less demand and smaller portions, you are likely to meet lower prices for the same quality food. If there is a popular dish on the dinner menu, there is likely a similar lunch version of the dish.

Like any rule, there are exceptions to this. You are probably thinking of some right now. Of course some places are busy at lunch. It isn’t always easy to take a full hour for lunch. Some dishes are only available at dinner. Yeah, I get it.

The point here is to approach going out in a different way: Go when other people aren’t going. Lunch during the week is the easiest for me given my flexible schedule. If lunch doesn’t work for you, try going out later (9pm or after) or going out in bad weather.