Wineberries are ripe here in the Hudson Valley this week, so I picked about two cups of them and Amanda baked them into a flaugnarde. This might become a yearly tradition.

Wineberries are an invasive cousin to raspberries, brought to the US from Japan and other parts of Asia to cross-breed with the local raspberry stock. The plants are hearty, full of nasty thorns, and difficult to get rid of, but they produce pretty berries the color of red wine. They have fewer seeds than raspberries and the fruit falls apart easier.

You can identify wineberries by the color of the berries (red wine), the leaves (a cluster of three whose pattern and shape is pretty distinct), and how fuzzy the protective wrapper is on unripe berries.

A flaugnarde is a fruit tart with a consistency halfway between flan and custard. A custardy cobbler, if you will. Up until about an hour ago I had been calling it clafoutis, since we made one of those with black cherries on Monday. When I mentioned yesterday that the wineberries were ripe, Amanda thought they would go great with the clafoutis batter, so we made one. Then I started doing some research for this post and found that the French, who are quite particular with naming, only consider the dish a clafoutis if it contains cherries. If it has some other fruit, it is a flaugnarde. C’est les Français. A flan by any other name…

It is good warm, but even better cold. Let it cool after you make it, eat a small slice, then stick it in the fridge overnight.

It isn’t overly sweet, so it goes great with coffee in the middle of the afternoon. This is the year of the snacking cake, after all. (See Yossy Arefi or Bill Clark.)

We like the Smitten Kitchen recipe for the base. We used vanilla instead of almond extract with the wineberries, which was a good choice. Almond complements cherries, but would be too much for the wineberries.

In case you were wondering:

…or so I think. I once got mocked in the Charles de Gaulle airport for my pronunciation, so I might not be the most reliable source here.

After Christmas dinner at Grandma’s house this year, I had my Grandma and Aunt Margie explain some of the traditional Christmas foods that come from their side of the family, the Kulhays. Like many of the early 20th century immigrants in the Cleveland area, the Kulhays are from Hungary.

I picked four Christmas staples: Székelygulyás, Sauerkraut Balls, Töltöttkáposzta, and Christmas Jello. After the videos, Grandma and Aunt Margie graciously opened their cookbooks and shared their recipes. Grandma’s cookbook is a treasure:

A gulyás is a stew. This one contains sauerkraut and pork. Grandma said that this is traditionally a New Year’s dish, but she makes it at Christmas since that is when we are all home. Grandma eats it by itself, but most of us grandkids prefer eating it over dumplings.

Here is the recipe:

Aunt Margie said that this recipe originally came from McGarvey’s restaurant in Vermilion, OH, where one of her aunts worked. The recipe sounds like a clever chef devised it as a way to use up the weekend’s leftovers. It stuck throughout the years because it is delicious. Here is a McGarvey’s logo from the late 60s:

Here is the recipe:

Töltött means stuffed and káposzta means cabbage. My family makes these in batches of 50 or 100 during the holidays and for big parties like graduations. I have lots of early memories of 4 people at a time standing at the counter rolling meat in cabbage leaves. I even rolled a few myself!

Every year, the first dessert we eat after dinner is Grandma’s Christmas Jello. It is an 8-layer jello cake that takes Grandma all day to make. The colorful layers are the normal jello flavors and the white layers are made out of scalded milk and sour cream set with gelatin. You have to let each layer set before pouring on the next layer.

Next year we’ll go over the baked goods!

Mexican peaches are starting to pop up in stores around the US and summer is coming, so now is a good time for a simple, delicious, peach-based dessert recipe: Grilled Peaches.

This is best done outside while sipping some cheap beer to beat the heat, but if you are like us and live in an apartment, using a grill pan works, too.

To get your ideas flowing, here are 13 combinations of thing you can put on grilled peaches:

We were at Stew Leonard’s this week and they had a few bags of ultraripe mangos on the discount rack. Perfect for summer ice cream.

I like some light toppings on my ice cream, I bought A TON of mangos, and I love the combination of mango and honey. So, I made this compote and it was a winner. (By the way, a compote is fruit stewed in sugar or syrup, in case you were wondering.) 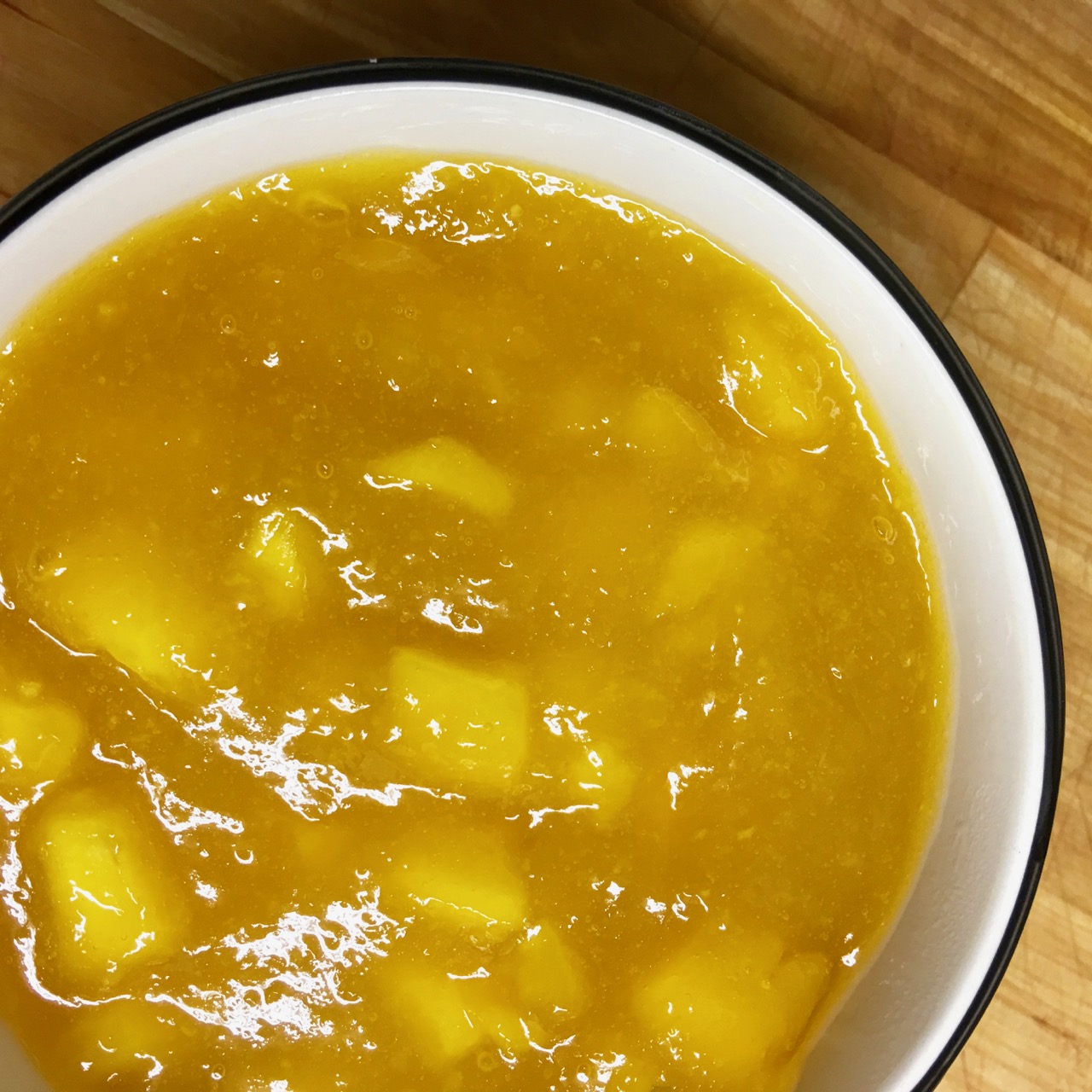 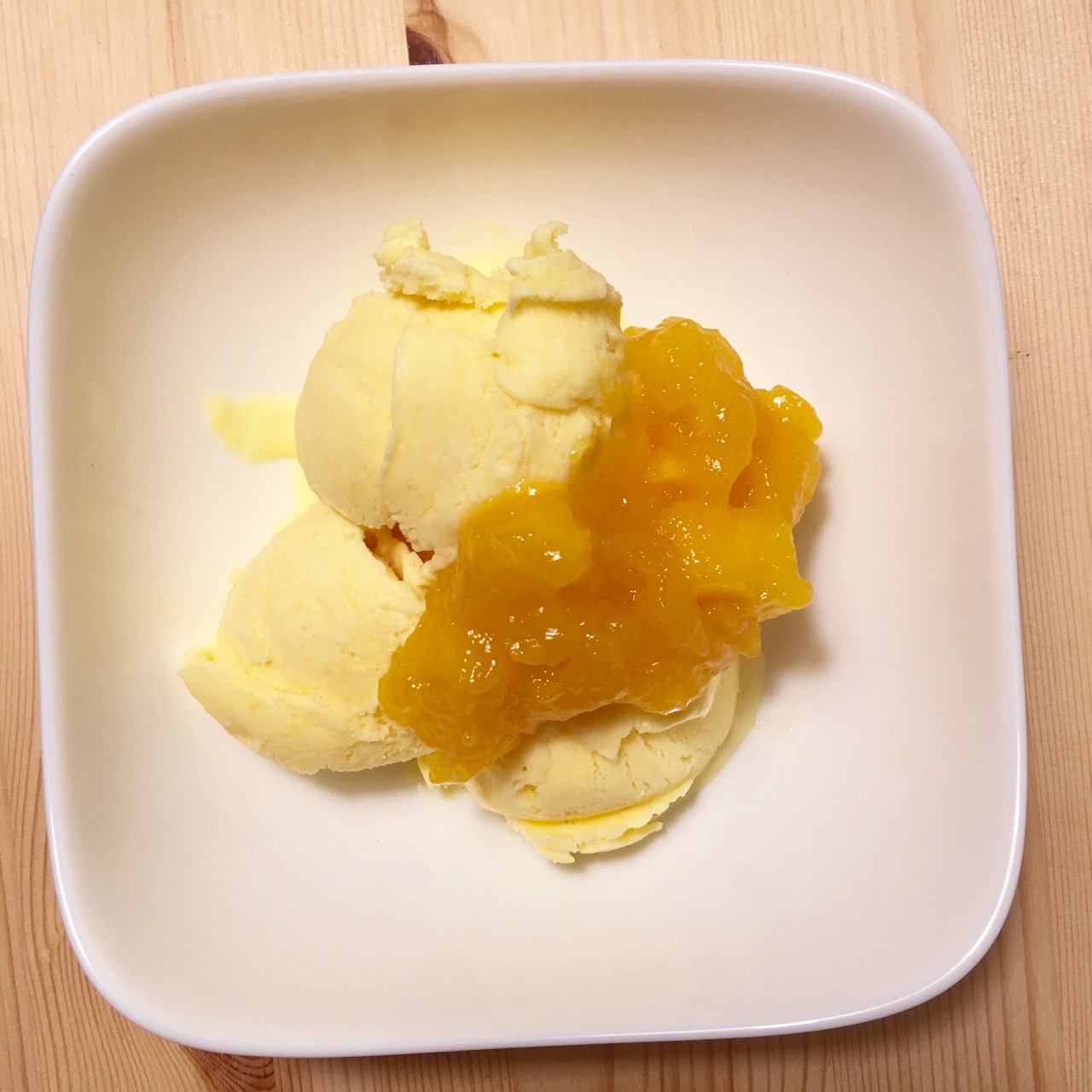 Summer is watermelon time. Since cutting up watermelons can be a pain if you don’t know what you are doing, here is how to do it:

I just tried this method and went from having a whole watermelon to cleaning the juice off the countertop in under 5 minutes. 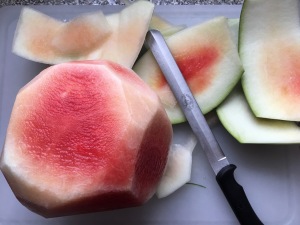 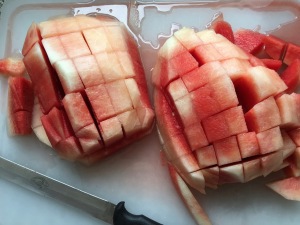 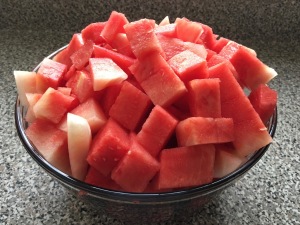 I prefer gorging myself with watermelon for breakfast and dessert, but if you want something different, try adding feta, mint, lemon zest, and olive oil for a fantastic salad.

Granitas are a perfect way to use up ripe, in-season fruit and make a refreshing dessert.

I bought a golden honeydew at the grocery store, but didn’t get around to cutting it up and eating it until it was so ripe that it wouldn’t last long after being cut up. I settled on making a granita, an Italian ice-based flavored dessert that has varying consistencies across Italy. 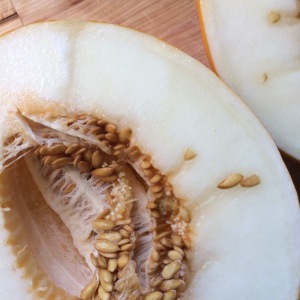 I searched through David Lebovitz’s The Perfect Scoop (one of the best frozen dessert recipe books out there) and came across this recipe for a melon granita. Perfect.

In general, granitas are made with fruit pureed with sugar and water. You can make one with nearly any fruit. Some people even make them from strong coffee and sugar. Use this recipe as a base and generalize.

Cut the melon in half, remove the seeds, cut into slices, and remove the outer peel and rind. Put the melon and the rest of the ingredients in the blender until completely smooth.

Pour this mixture into a large, flat baking dish, or any large dish to maximize the surface area of the liquid, and put it in the freezer. (Make sure you have a flat space to set it!) After an hour, break up the large chunks of ice with a fork and mix it in, then put it back in the freezer. Start checking and breaking up the ice again every 30 minutes until you reach a consistency you like. If it freezes too hard, leave it out on the counter for a bit and mix it back up again.

Serve it in a glass or small bowl with whipped cream, or simply eat plain, as pictured above. 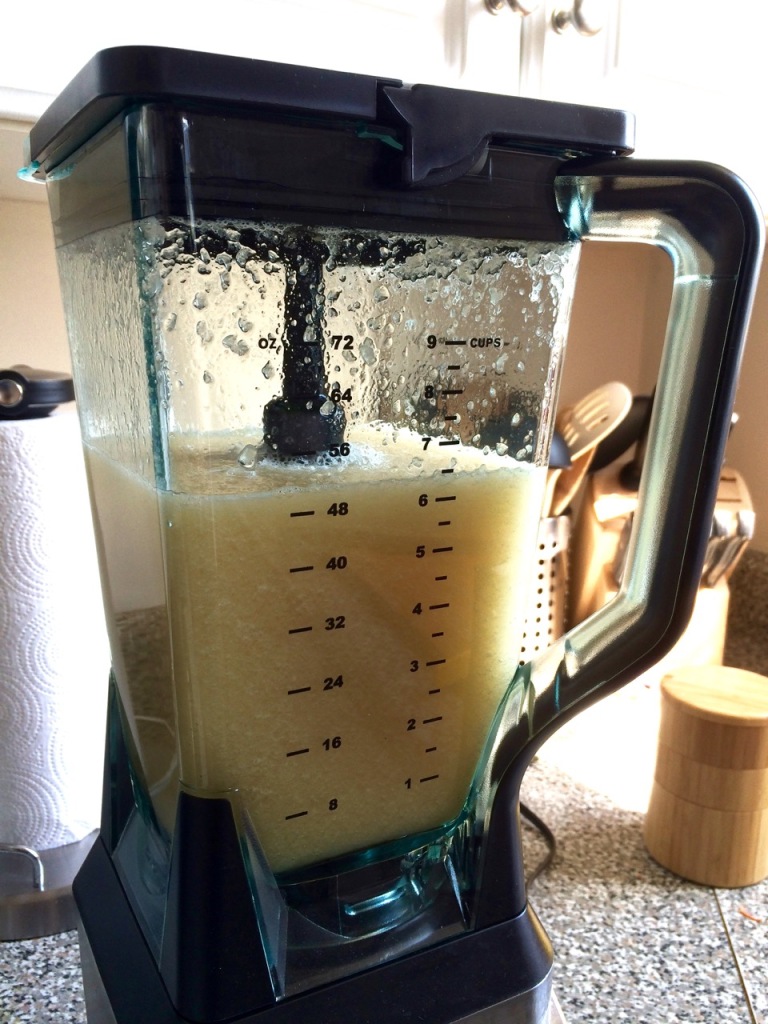 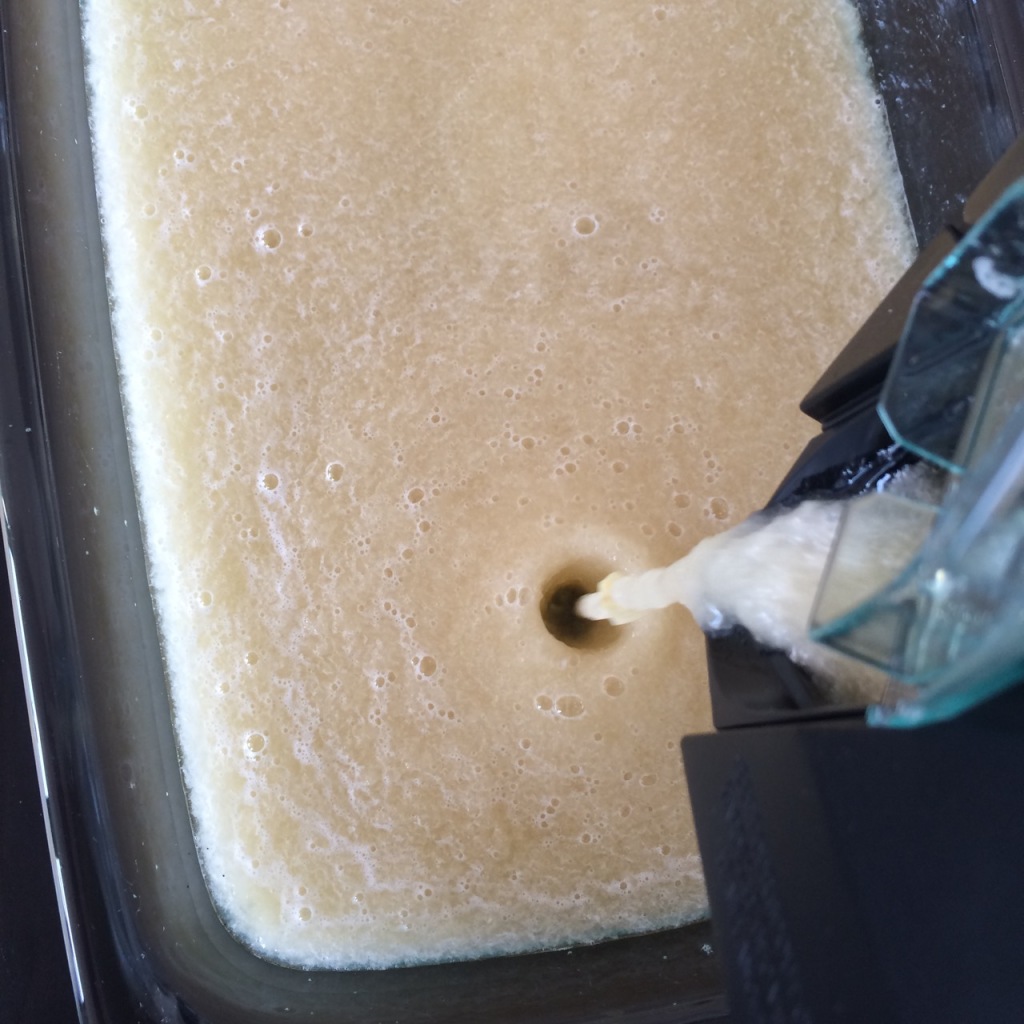 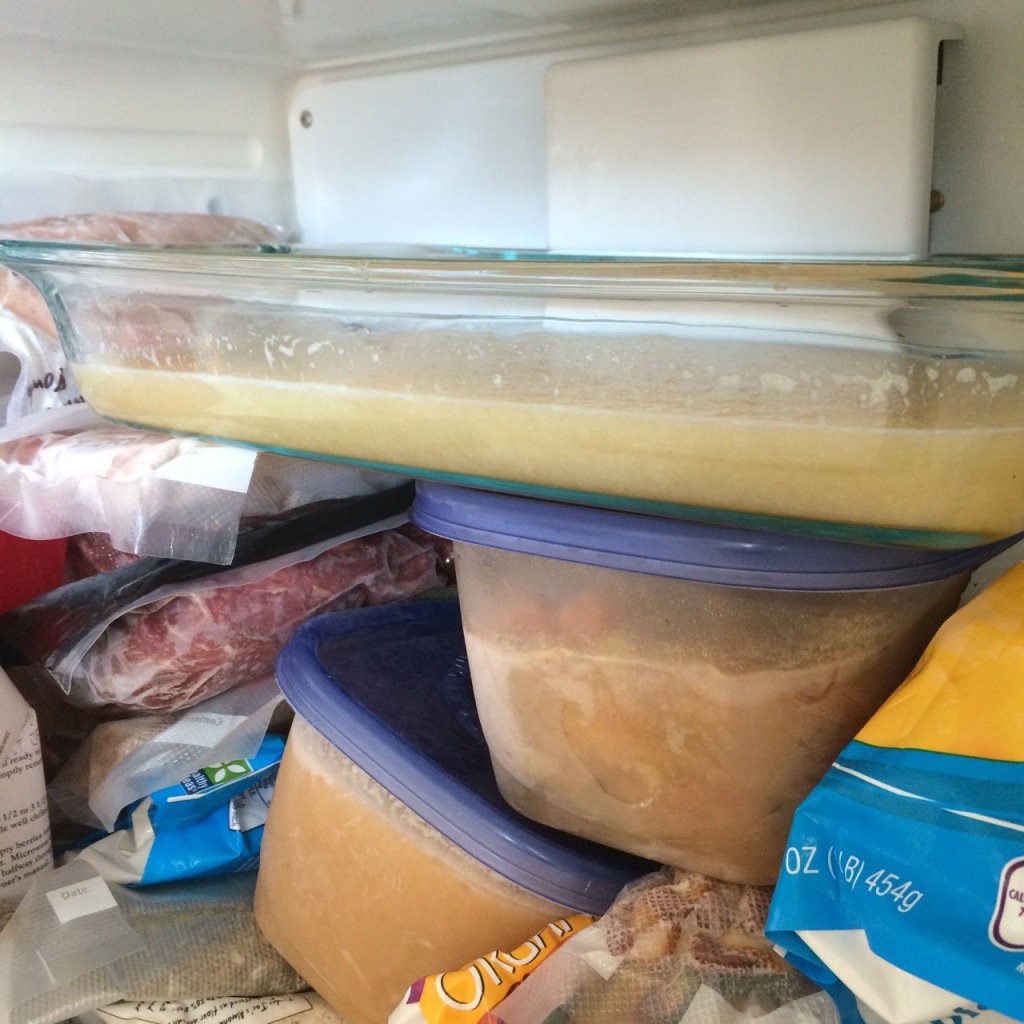 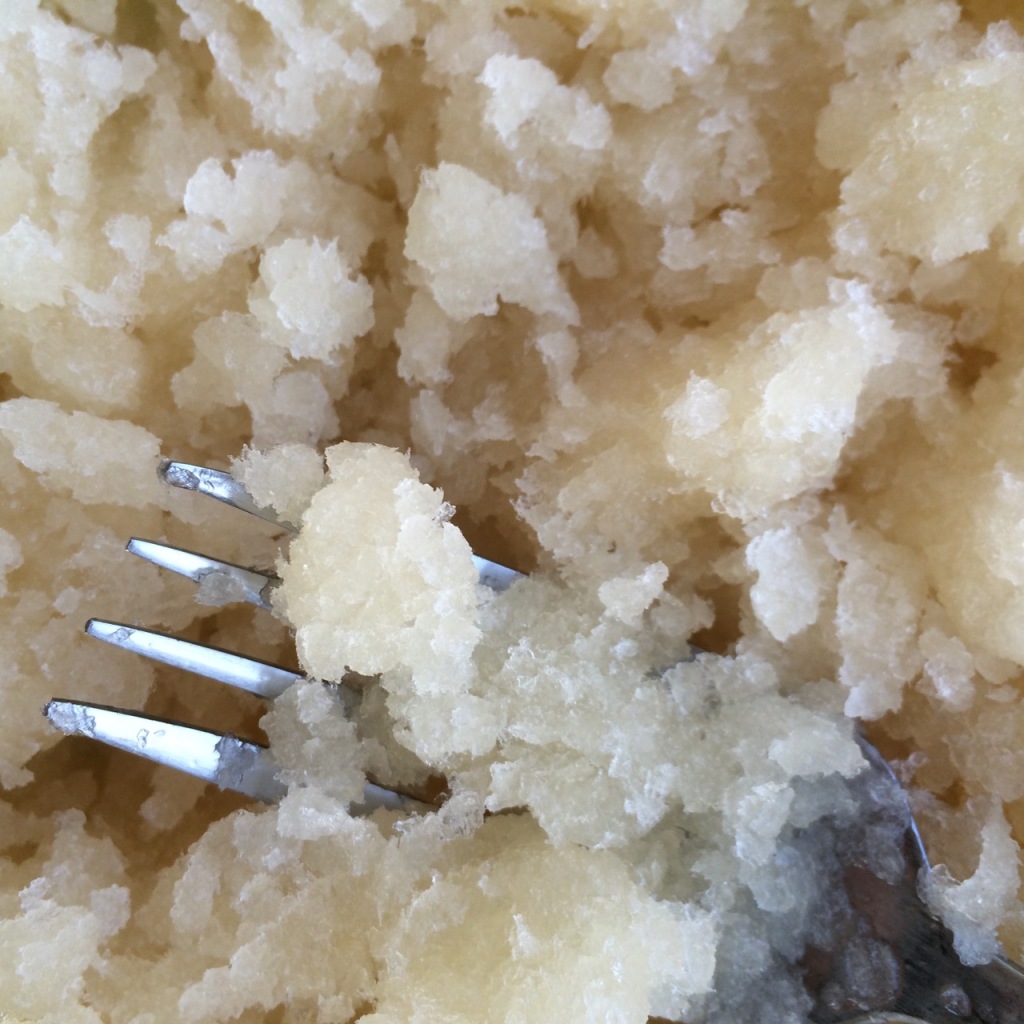 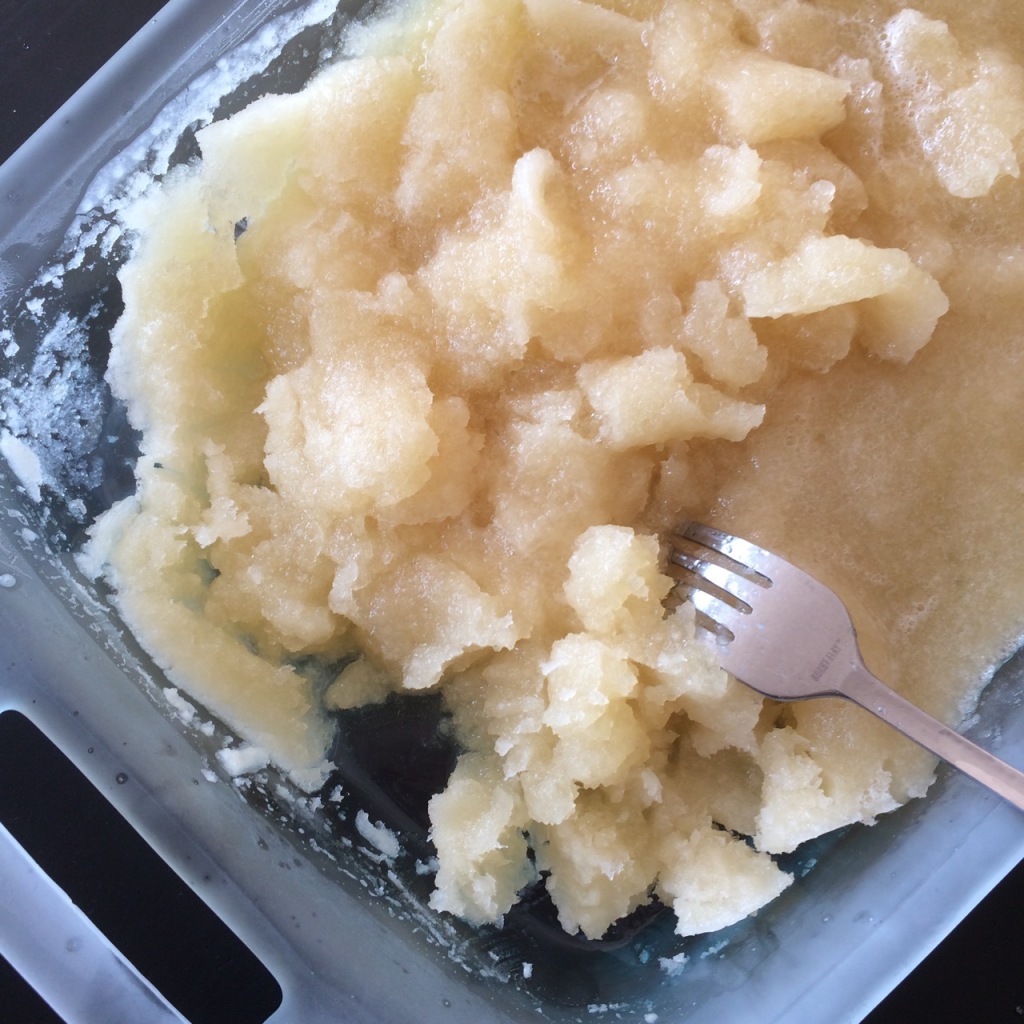 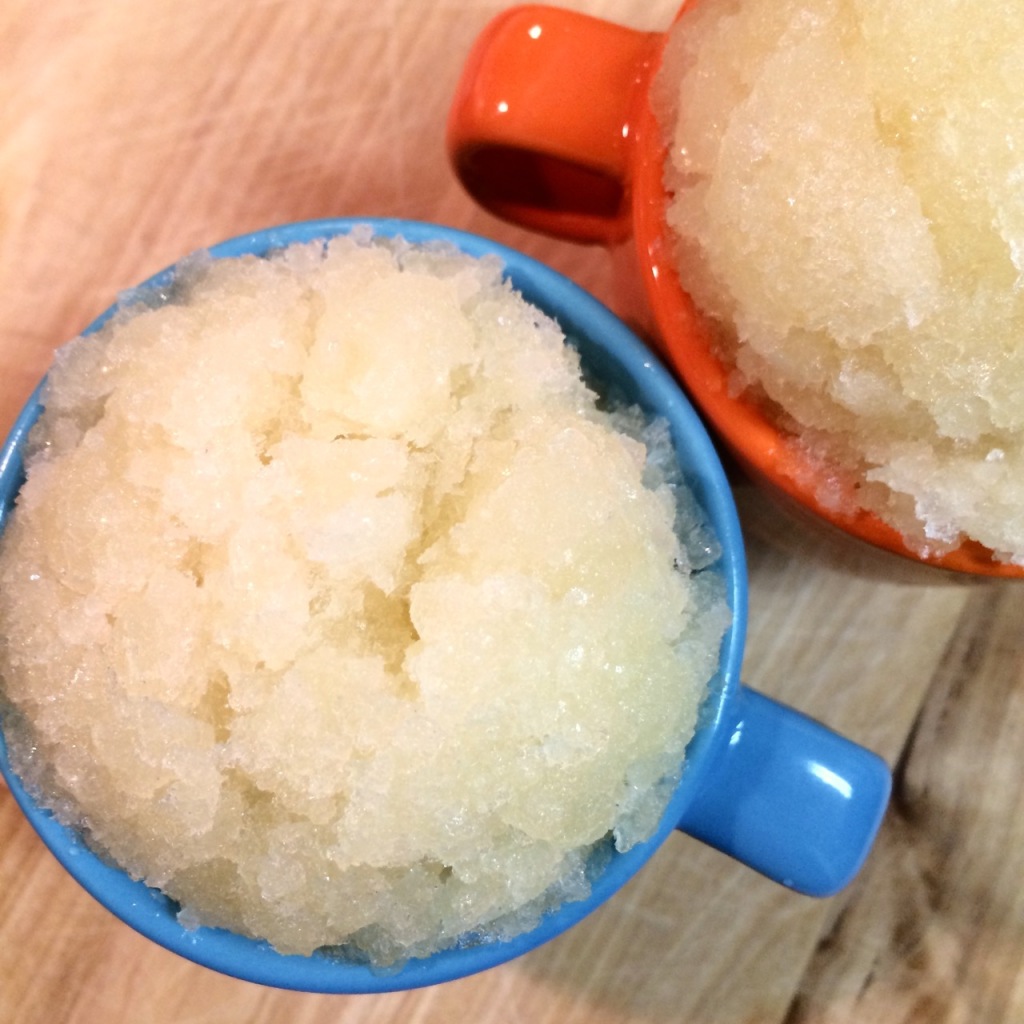 This was delicious and lasted us for a while. I’m going to experiment with more granitas in the future. Here are some ideas: