I really love burgers. They are one of my favorite foods. When I heard about the Impossible Burger a few months ago, I knew I had to try it. It is made completely from plants, yet is supposed to cook, smell, look, and taste just like a real beef burger. Could this be possible? I really wanted to know.

I’m definitely in the meat-eater camp, but I am interested in reducing land use, greenhouse gas emissions, and water usage. I’m also interested in sustainably feeding the world’s population, so I’m very pro meat alternatives. Especially ones that taste good.

It definitely looks like meat! Check this photo out:

I know that marketing photos and claims can sometimes be deceiving, so I wanted to try this for myself. It isn’t carried in stores yet, but the Bareburger chain has it on their menu across the US. There happens to be one near me, so I convinced Amanda to go this afternoon so I could try it.

What Impossible got right

When the Impossible Burger showed up at my table, I was surprised at how much it looked like a beef burger: 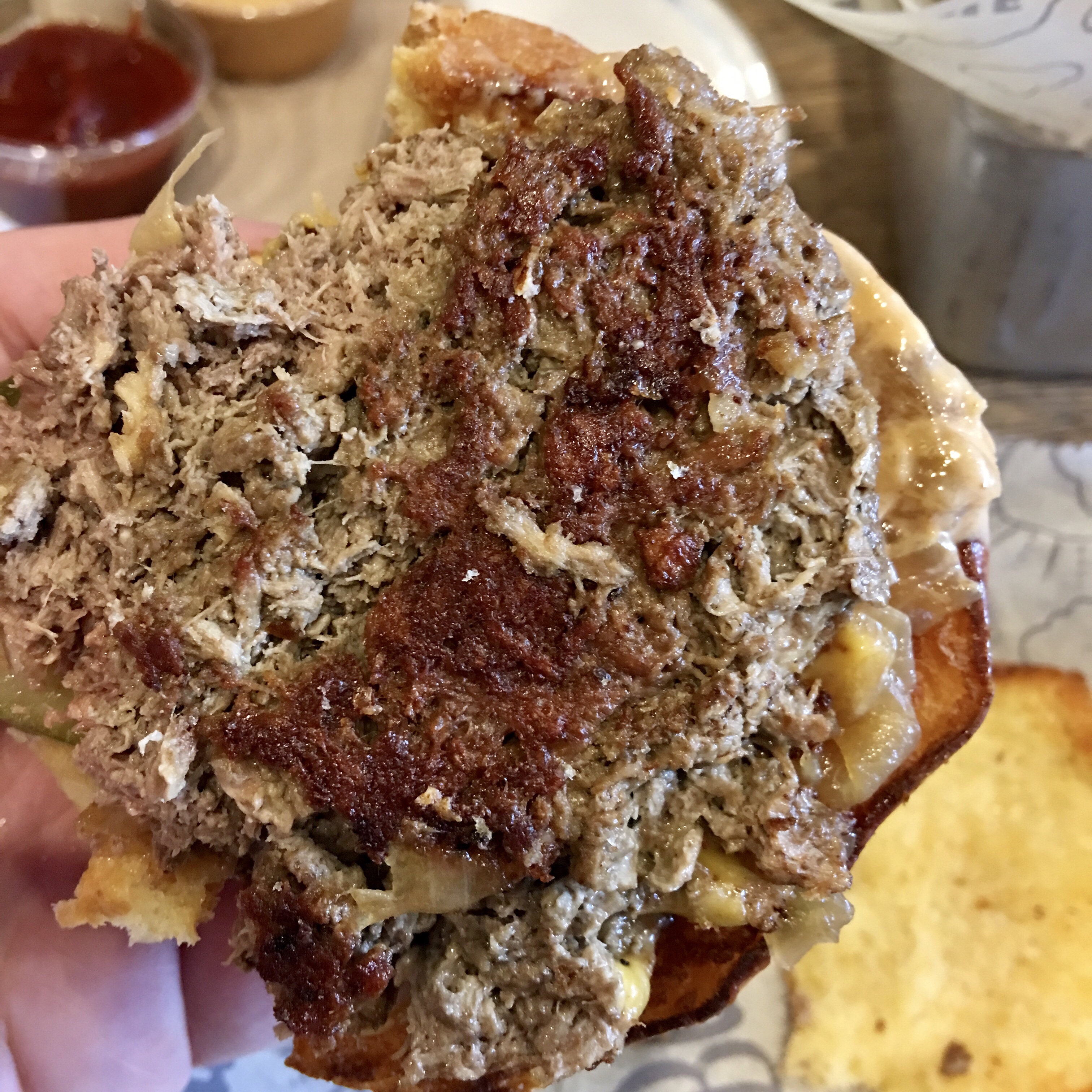 Here is a photo of me taking the first bite: 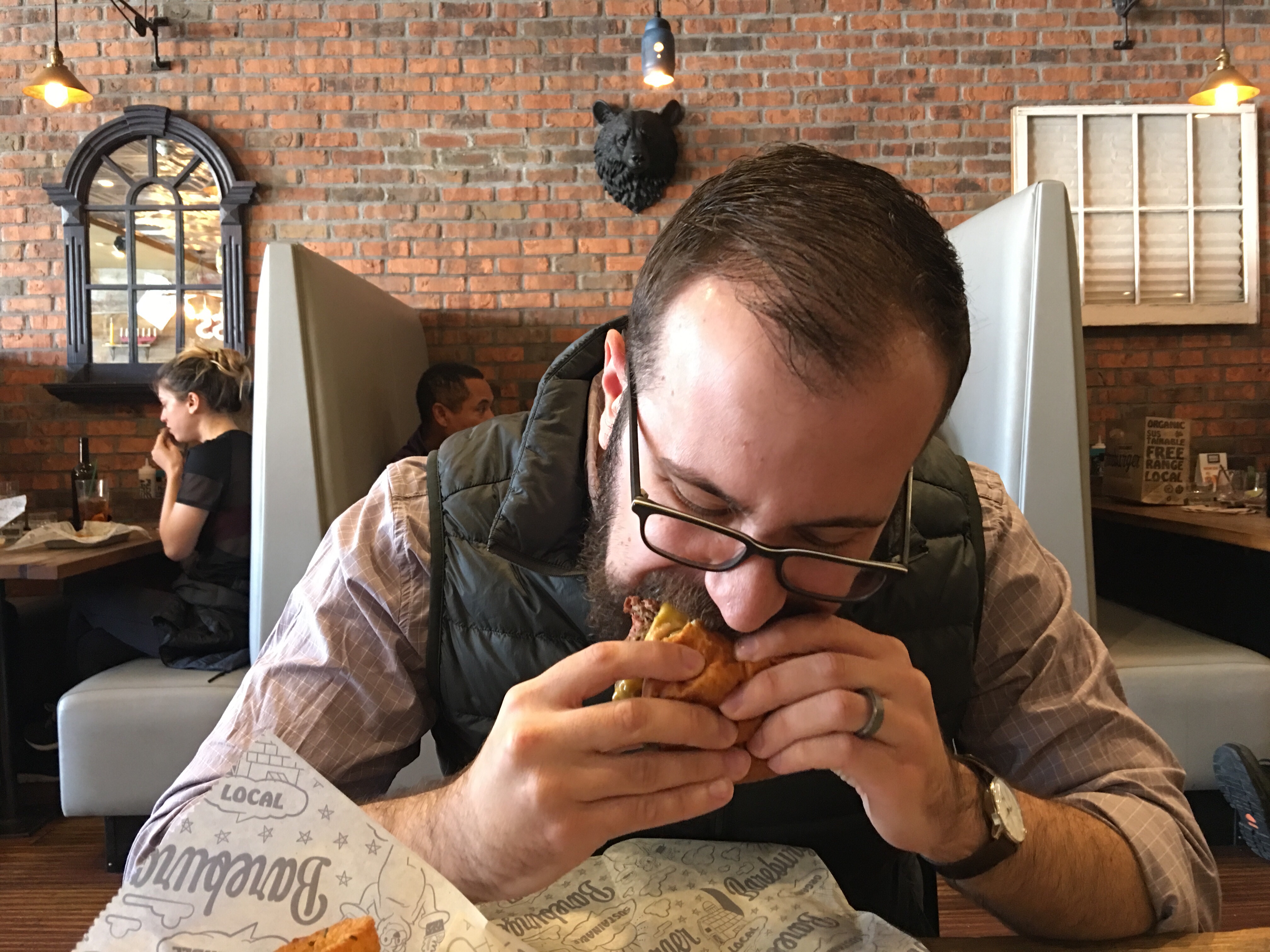 After the first bite, let’s take a look at the inside: 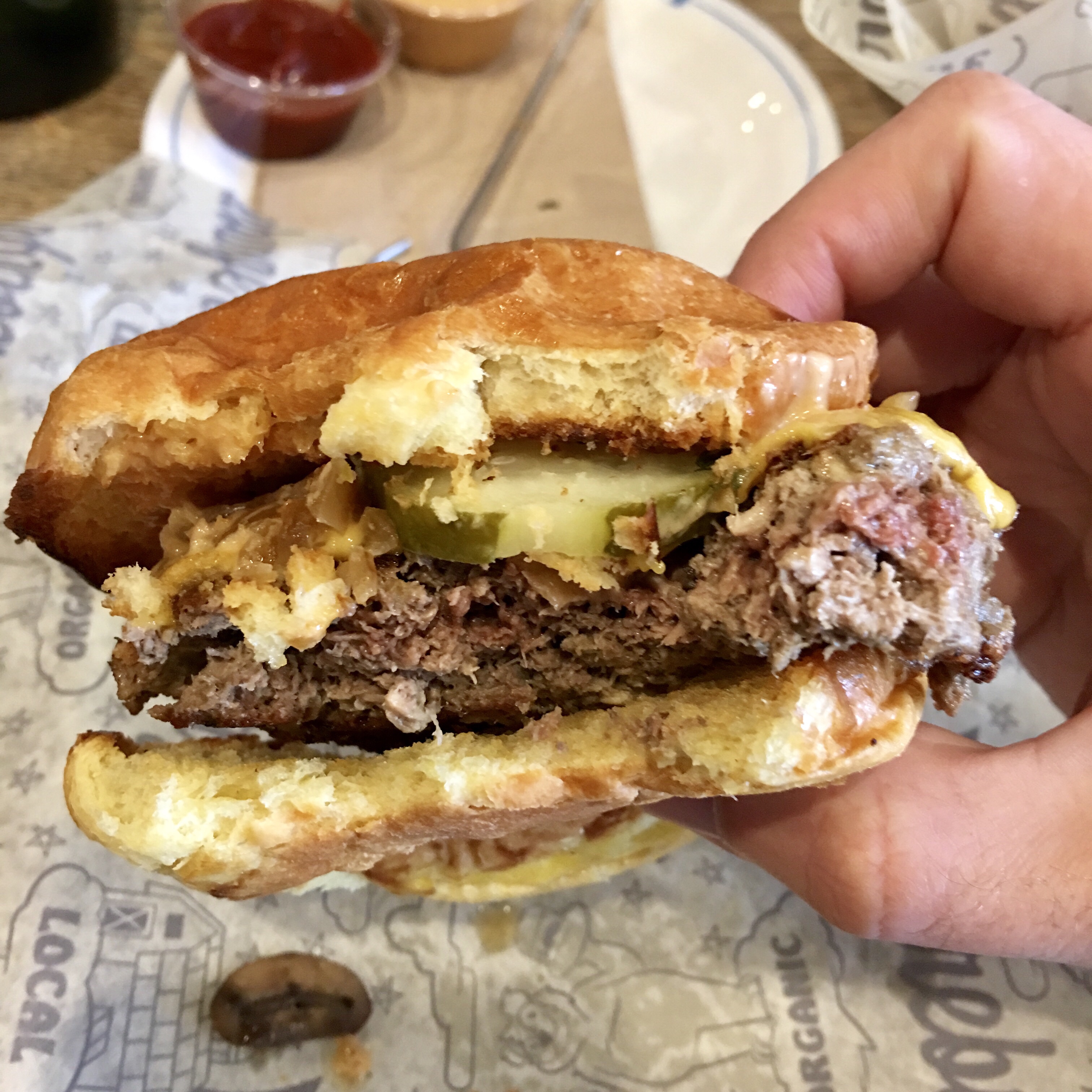 So, it really does look and feel like a real burger. Passes 2/3 of the test.

Unfortunately, though the Impossible Burger looked like and had the same texture as a beef burger, it didn’t taste like beef. That was clear from the first bite. Instead, it had a soy/nutty/bean flavor that I couldn’t quite put my finger on. The main flavoring in the Impossible burger, heme, comes from fermented soy. [CORRECTION: Fermented modifies yeast strains with soy genes.] Maybe that is it. The wheat and potato ingredients are likely pretty bland in and of themselves.

It wasn’t bad, just different. I really wanted it to taste like beef, and I even expected it because of all the hype. So I was a little let down. That said, it wasn’t a complete loss. The Impossible Burger took on the flavor of its toppings whenever there were any included in the bite, so that was a pleasant surprise. Good toppings are just as important as good meat, so letting toppings take the spotlight isn’t a bad idea.

I think mixing some Worcestershire Sauce into the burger patty might go a long way to improving the flavor. It won’t get all the way there, but it will pack more of an umami punch. Unfortunately, that wouldn’t be vegan anymore because of the anchovies in the Worcestershire. Perhaps there are non-anchovie versions of it that pack the same punch?

I’ve definitely had worse beef burgers than this. The Impossible Burger beats out dry, overcooked, or old/low quality beef burgers any day. But this version doesn’t beat out burgers made with good beef, cooked correctly, and topped with quality toppings. I had an excellent burger at Bridge View Tavern last night so I could keep it fresh in my mind. The Impossible Burger definitely fell short of its beefiness.

So, I give the Impossible Burger a 2/3 overall. It looks like and has the same texture as a beef burger. But it doesn’t taste like beef.

Don’t throw in the towel yet…

I don’t think the Impossible experiment is worth giving up just yet. A burger is one of the hardest tests to pass for beef alternatives because burgers rely heavily on the flavor of the beef itself, which seems to be the most difficult thing to replicate. Impossible does need to reach this high bar to fulfill their vision, but this version doesn’t quite make it. That said, given that Impossible passes the look and texture tests, there is still a giant market for this version of the product.

So, what are some uses of ground beef that don’t rely primarily on the taste of the beef to carry the dish? Where does the texture of beef shine and other ingredients carry the dish’s flavor?

Each of these dishes rely on the texture of beef and a little umani from it, but not necessarily a deep beef flavor like the hamburger does. Since the Impossible Burger readily takes on the flavor of other ingredients, I think the other spices and ingredients in these dishes will go a long way toward compensating for the Impossible Meat’s flavor shortcomings while putting its texture and nutrition on display.

When Impossible Burgers finally hit retail stores, it will open up a lot of possibilities for other dishes. This is currently the best beef substitute out there.

Impossible Foods, if you want to send me a bunch of your burger meat, I’ll do a lot of testing with different dishes and write about it! Hit me up at chuck@grimmett.co or @cagrimmett.